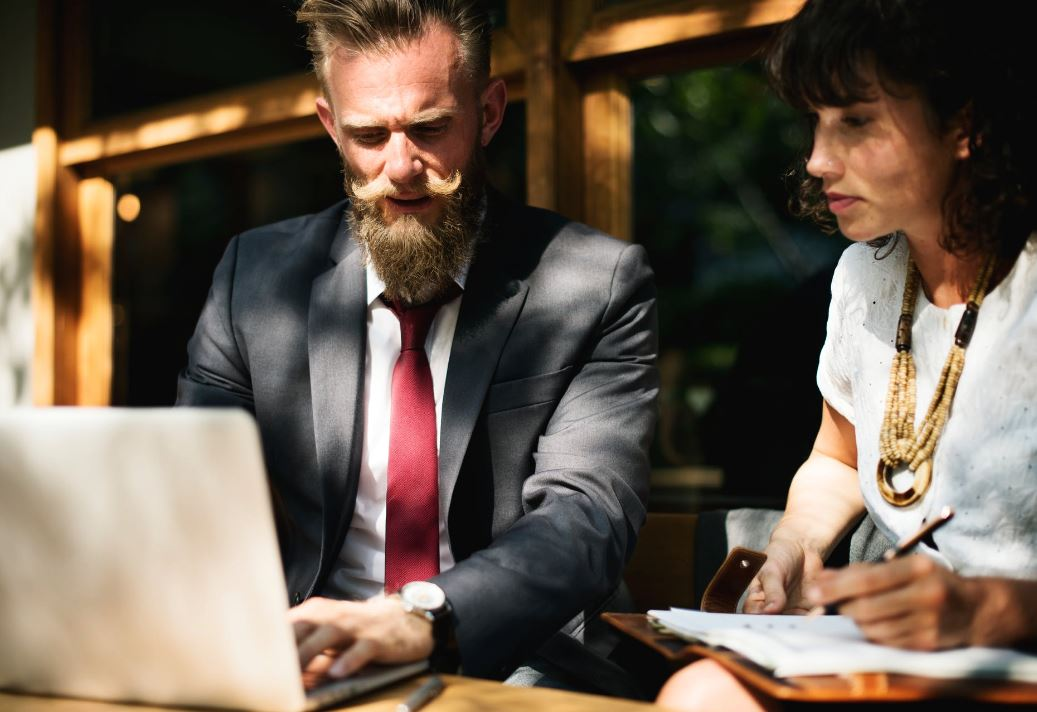 Hey Harvard applicants! When you’re applying to university, there are certain things that can make or break your whole application. Letters of recommendation are one of those things. Harvard recommendation letters are taken very seriously by the admissions office, since they are a great way of showing whether the applicant is a good candidate. Not only that, a good LOR even shows why.

Why Are Harvard Recommendations Important to Your Application?

Harvard University receives tens of thousands of applications each year, per school. So to find out who they should accept and who to reject, they must find the brightest, most excellent candidates.

Also read: What Kinds of Students Get into Harvard? 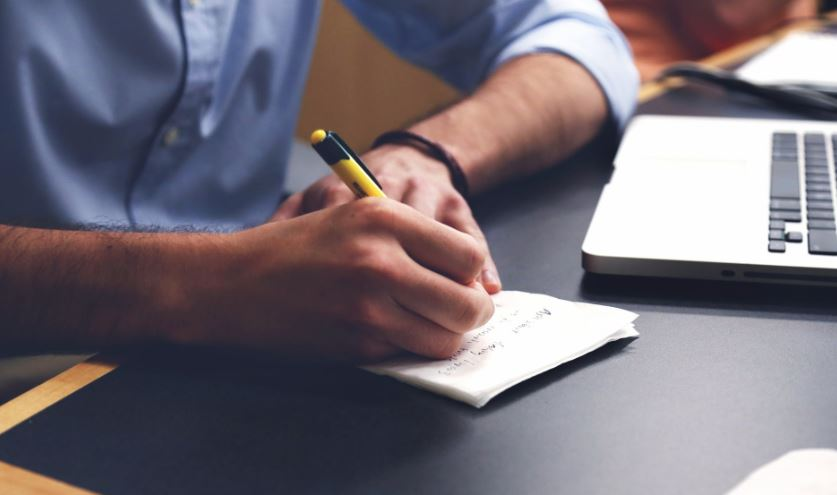 Receommendations are important because they are the only parts of an application the student has little control over. They are sent without the applicant seeing them, and that makes them fully authentic. They are a way of knowing who the most experienced professionals in an institute would recommend to be admitted to Harvard.

Letters of recommendation are a great way to illustrate the academic or professional history of a student. Only students who excel socially, academically and personally can get an exceptional recommendation.

How Many Recommendation Letters Does Harvard Require?

Two letters of recommendation are required as a part of a Harvard application. The number may vary for different schools at Harvard University, so check the admissions page for the school you’re applying to.

For example, Harvard College requires two Teacher Evaluation forms, and so does Harvard Business School. However, Harvard Law School requires at least two recommendation letters, but accepts up to five. in this case, most candidates send three LORs.

How to Send Your Harvard Recommendation Letters?

Recommendation letters are sent directly by the person who you’ve requested to recommend you. This can be a professor from college, your supervisor at work, or someone you’ve worked with in a professional capacity. This means that you won’t be able to see what someone wrote in your letter.

Most schools require your recommenders to either upload recommendation letters online, or fill out an evaluation form online. Some schools may also accept paper applications, so be sure to check your school’s admissions page to be certain. 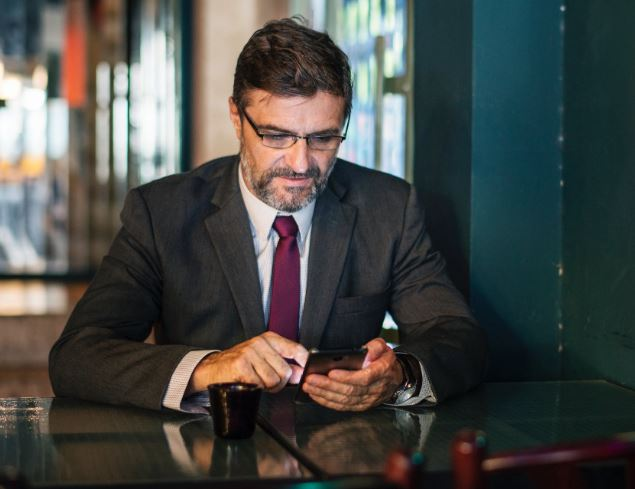 Who Should You Get a Letter of Recommendation from?

Choosing your recommender is the most important part about getting winning Harvard recommendation letters. That’s because this is the only part you can actually control! Other than that, it’s up to your recommenders to send a good letter.

Ideally, you should get letters of recommendation from people you know professionally, but those you know you well. It’s a good idea to get a letter from someone who’s at a position of authority at your college or office, such as the dean or senior professor. Go for someone who’s encouraging and someone who you believe will give a good recommendation.

1. Someone You Know Professionally

This is an important criteria to keep in mind. LORs are considered only when you get them from someone you have worked with in a professional capacity, or someone who has taught you in school or college. Simply finding a Harvard alumnus or ivy league educated person is not enough. Letters from those you know personally, like your friends or family members, are not accepted.

Additionally, Harvard prefers recommendation letters from someone who has worked with the candidate in the same field as they’re applying for. Like if you’re applying to Harvard Law School for masters, a good letter of recommendation would be from your law faculty at college.

Harvard Business School writes about who to get recommendation letter from, “This can be a former supervisor, a colleague, someone you collaborate on an activity outside of work. How well a person knows you should take priority over level of seniority or HBS alumni status.”

2. Someone at a Senior Position

Ideally, you need to get a letter of recommendation from the most senior person at the institution. A college dean, your school’s principal or your office’s Chairperson or President are good examples. If you don’t know any of these people personally, the best idea is to get someone at a similar position of authority to write a recommendation for you.

For example, I got three Harvard recommendation letters:
a. From the Vice President of the company I had been working at for well over a year after college.
b. From the Dean of Students of my college, who also later became the College Dean.
c. From an Associate Professor of my college. 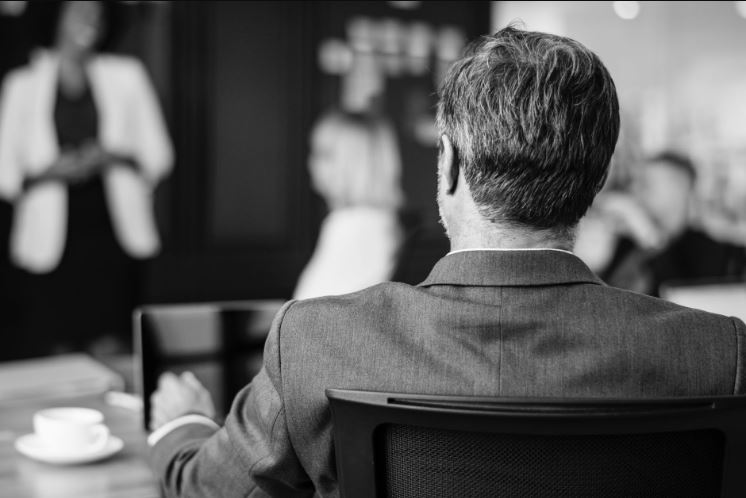 3. Someone Who Knows You Well

This is the most important thing to keep in mind when choosing someone to request Harvard recommendation letter from. Only someone who actually knows you and has worked with you or interacted with you more than a few times will be willing to write a letter for you. For example, your direct supervisor at office, or a professor who has taught you multiple classes at college.

Moreover, only someone who has worked with you closely will know about your strengths, which will make a strong recommendation letter. Only someone who knows you well will be able to answer detailed questions about you, or write a letter that includes examples of your qualities or skills. Otherwise you’ll get a generic, dull-looking letter that won’t impress the admissions office.

4. Someone Likely to Give You a Good Recommendation

You want to request letter of recommendation from someone who thinks highly of you, is impressed by your work or at least respects you. The worst idea would be to request a person who doesn’t like you! Letters of recommendation are sent secretly (without knowledge of the applicant). And surely, there have been instances where a recommender has given a terrible letter, obviously resulting in rejection of application. 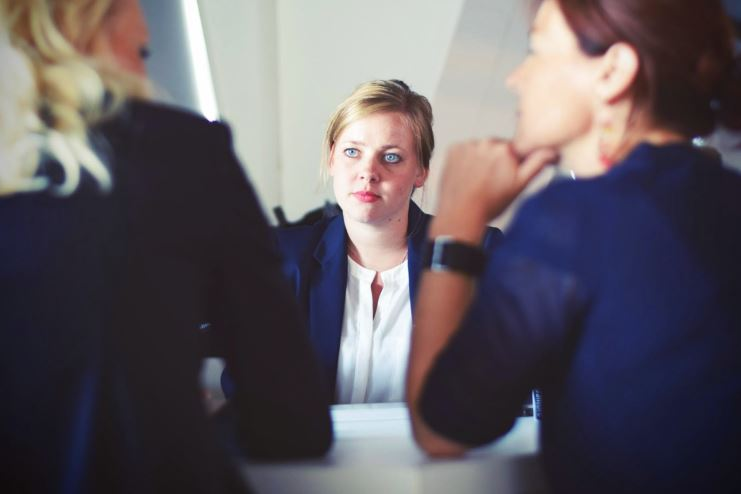 Application time is full of self-doubt, fear and stress for students. Discouragement is the last thing you need when you’re applying to any university. One of my classmates from Harvard once told me a story of how she went to request her college dean for a recommendation letter, but he refused to give her one, since he didn’t think she would get selected. And she was left crying and discouraged. Obviously, she got good letters from other professors and eventually got selected! True story!

How to Ask for a Letter of Recommendation?

Requesting a letter of recommendation can be an intimidating task, especially from someone important. But if you’re asking the right people, you’ll be surprised at how encouraging they may be!

When requesting someone for a recommendation letter, it’s a good idea to first start by telling them what program you’re applying for and which universities you’re thinking of. Explain your plans about what you’re expecting college will do for your larger career goals, or why you’re doing masters. 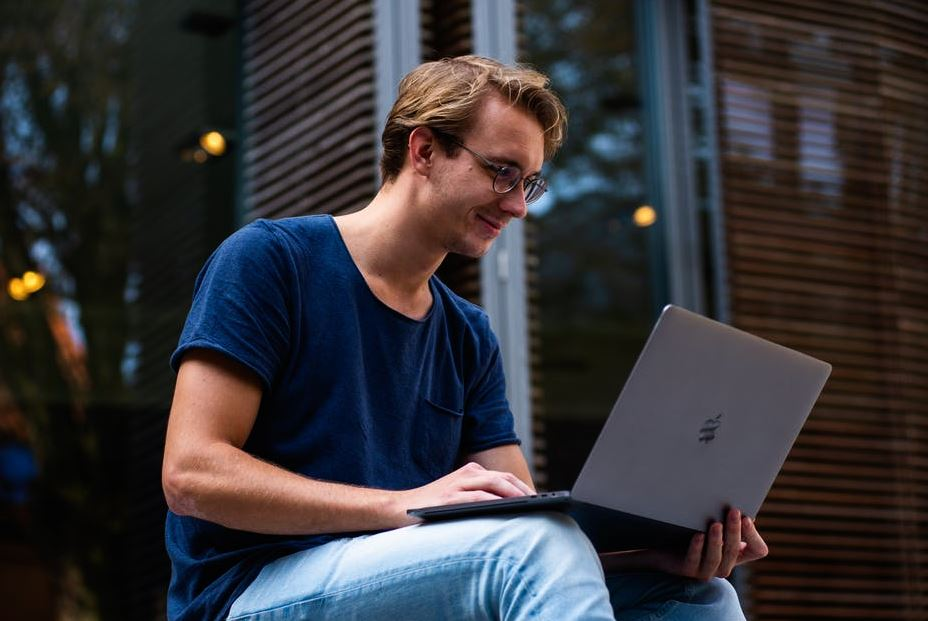 Also tell them why you chose them to be your recommender, and what you eventually want to achieve in life. For example, “I’m applying to Harvard for a Masters in Education, and I’d really appreciate it if you wrote me a recommendation letter.” Be honest, respectful and polite.

Honesty goes a long way when maintaining professional relationships and requesting a favor. I told my college professor that I was very nervous about applying to Harvard, wondering whether I was good enough. He told me he thought I was good enough and encouraged me to apply, and he also gave me a glowing letter of recommendation!

How to Ensure Harvard Recommendation Letters are Submitted on Time?

This is something you’ll just have to manage with the rest of your application. A good reminder is usually more than enough. Politely let them know the deadline for sending it. And then a week or so before the deadline, you can send them a reminder email, or call over the phone to ask them if they’ve been able to send it. You can also ask them if there’s anything they need your help for, such as logging in, etc. How to Ensure that You Get Great Harvard Recommendation Letters?

Since these are sealed or submitted directly by the recommender, there’s not much you can do to ensure. Generally, if you select the right people to write a letter for you (see above on who to get it from), then you can trust that they’ll send a good letter.

Most recommenders will be happy to send out good letters of recommendation, since it’s a matter of pride for them to see you succeed if they believe in you. But how to get them to believe in you? Well, this is a process you need to start working on way before you begin your application.

1. Make sure you are in the good books of your college professors or employer.

2. Be polite, help them out with anything if necessary, or . Show them that you’re worthy of their respect.

3. Take up projects or extra responsibility. It’ll not only make sure they are willing to give you recommendation, but also give them something to write about in your recy letter.

4. Don’t go out of your way to show them your work or strengths right before your application. People can see through fakeness. Just be yourself, and excel at what you do. And you’ll be surprised at how willing they might be to give you glowing letters of recommendation for Harvard or any other university.

So i hope you found my guide to Harvard recommendation letters helpful. Please let me know below if you have any further questions on these and I’ll try to answer them.